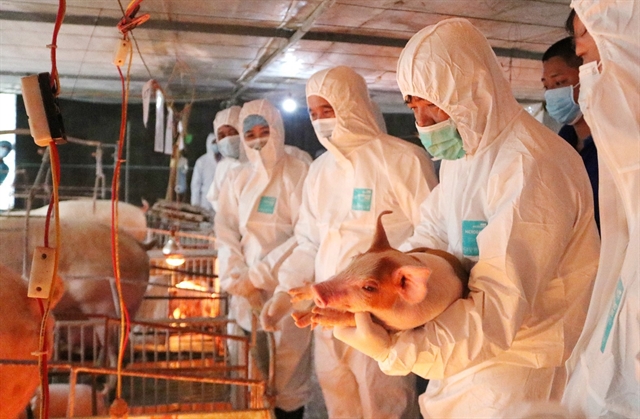 Pork price was asked to be reduced by Vietnamese Ministry

The Ministry of Agriculture and Rural Development was visiting a pig farm in Phu Ho Commune, Phu Tho Province. (Photo source: Trung Kien)

Cuong emphasized that during a trip to investigate pig reproduction in the northern province Phu Tho on Tuesday.

He pointed out that some big firms were selling live hog at VND75,000 (US$3.2) per kilo, at which level they already were making large profits. In some retail spots, live hog prices were even higher.

According to Nguyen Xuan Loc, head of the management board of Ha Nam cattle and poultry wholesale market, said that live hog prices were on a downward trend in recent days after hitting a record of VND90,000 per kilo in early March in the northern region. In the market, hog prices were currently at around VND79-84,000 per kilogramme.

The Ministry of Agriculture and Rural Development was visiting a pig farm in Phu Ho Commune, Phu Tho Province. (Photo source: Trung Kien)

“There is room to lower pork prices,” Cuong said, emphasizing that it was a must to bring pork prices to reasonable levels so as to promote the sustainable development of the husbandry industry.

He also said that the African swine fever was already wiped out in 98 per cent of communes nationwide and now the focus should be placed on pig reproduction.

Cuong also urged farmers and husbandry companies to comply with bio-safety standards in pig raising to prevent the diseases and ensure product quality.