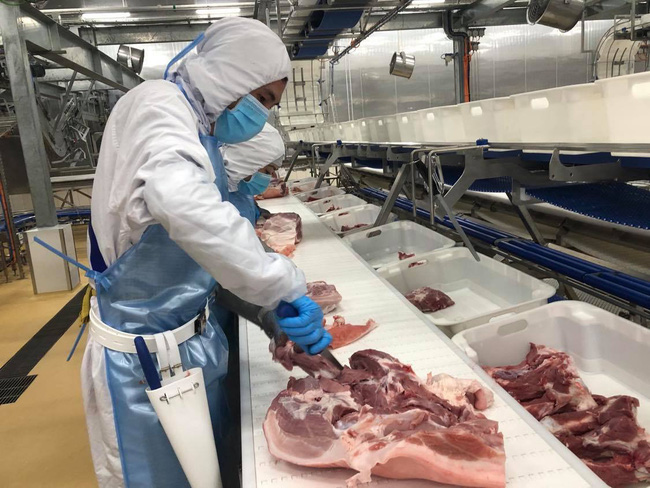 “Battle” of the meat industry after EVFTA

Raising the breeding scale, applying the most advanced techniques, ensuring the quality of output …, domestic enterprises in the livestock industry are ready to “fight” with rivals from Europe.

“No appointment but see”, after nearly 2 months of “immobilization” since the day the Free Trade Agreement Vietnam – European Union (EVFTA) officially took effect, large enterprises in the livestock industry in Vietnam The country simultaneously announced a large investment project.

At the end of September, Hung Nhon Group – a famous enterprise in the livestock industry – announced to cooperate with De Heus Group (the Netherlands) to invest in the Dak Lak DHN DHN – Dak Lak high-tech agricultural complex. The project has an investment of about 1,500 billion VND, an area of ​​200 ha, expected to be completed in 2025.

This combination will provide to the market about 25,000 brood and gilts; produce organic feed and fertilizers; trading livestock products, becoming the leading supplier of high-quality pig breeds to the Central Highlands and Southeast provinces, aiming to export to Southeast Asia …

“In the longer term, De Heus and Hung Nhon work together towards building a value chain with a disease free zone in Dak Lak and surrounding areas,” said Hung.

Not long after that, another big enterprise in the industry, MEATDeli Saigon Company (under Masan), put into operation the Meat Processing Complex with an investment of VND 1,800 billion in Long An, on an area of ​​20.2 hectares. 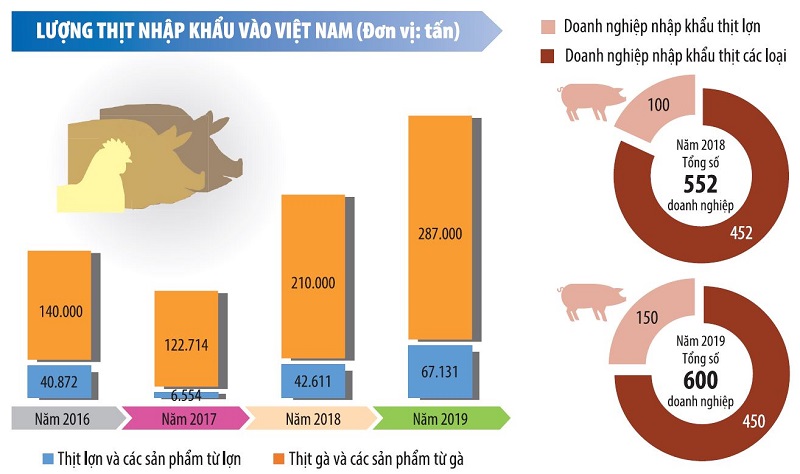 In the first phase of the project, Masan will invest VND 1,400 billion to invest in the area of ​​slaughtering, processing pork, cool meats with a capacity of 140,000 tons of meat / year. In addition to cool meat, the factory will provide products processed from cool meat such as sausages, scrub … with an output of 15,000 tons / year.

In phase II, the complex will increase the output of these processed products to 25,000 tons / year, and provide new products such as blood meal, plasma, bone meal … with a total output of 14,000 tons / year. year.

Well-known domestic companies in the industry such as Vissan, Hoa Phat … so far have not “spoken out”, but observers say that the “bounce” of the project is only a matter of time, because it is difficult for anyone. can sit still in the present context.

According to Masan, the pork market in Vietnam alone has reached more than 22,000 billion VND (about 10 billion USD); other meat products still have plenty of room for growth.

Therefore, it will not be too surprising that in the coming time, enterprises in Vietnam’s livestock industry will simultaneously increase investment in the vertical industry to meet the consumption of the market of nearly 100 million people, of which nearly one half is the young population.

Opportunity belongs to whom?

On the internet, it is not difficult to find meat products imported from Europe through the website of the enterprise, even on e-commerce floors such as Shopee, Tiki.vn with importers like Nam Khai. Phu, La Maison …

Meat and meat products processed from Europe have many advantages with modern technology and production lines, ensuring safety and hygiene criteria, and most importantly, the Vietnamese preference for foreign goods.

However, the foreign group’s distribution channel is still small, not having a large coverage, mainly consumed through retail shops and supermarkets specializing in selling imported products.

To develop a large enough network, foreign competitors need time and in that period of time, Hung Nhon Group will increase investment to gain advantage.

Specifically, this business will expand livestock farms that apply high-tech standards, use breeders imported directly from Europe, and strictly manage operations and processing stages according to Global Standards. GAP, clean meat quality assurance. Hung Nhon Group will also expand its distribution channels into supermarkets and stores across the country so that consumers can easily access products.

In fact, the more difficult problem that Vietnamese livestock enterprises have to solve is to reduce production costs to have competitive costs.

The race between domestic and foreign businesses in the new meat industry is at an early stage. Certainly, the race will be increasingly intense and the opportunity will only be for professional investment units. Domestic consumers will be the beneficiaries when they have the opportunity to use fresh, quality meat products at reasonable prices.