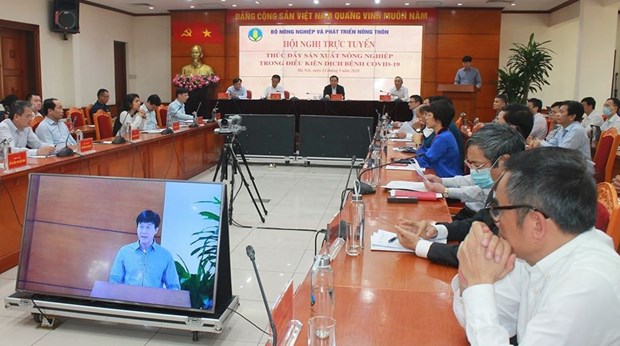 At the conference (Photo: baochinhphu.vn)
Speaking at a tele-conference in Hanoi on March 12, the minister pointed to major challenges facing the sector, including impacts of COVID-19, extreme weather patterns like hailstones, drought and saline intrusion, and diseases among livestock and poultry.
In such circumstances, the sector needs to step up production while implementing measures to cope with diseases, he stressed.
According to the minister, after the epidemic is extinguished, there will be a consumption boom, so the sector should make preparations to catch the opportunity to promote growth and exports.
He instructed localities to restore pig raising as up to 99 percent of communes are now free from African swine fever, striving for the production of 5.6-5.8 million tonnes of pork this year.
Regarding exports, Cuong said the Ministry of Agriculture and Rural Development will continue coordinating with the Ministry of Industry and Trade and Vietnamese embassies in foreign countries to hold trade promotion events in major and promising markets.
He informed that ministries, agencies and businesses will join hands to regain foothold in the Chinese market in the time ahead, and seek ways to ship more products to the neighbouring country.
According to Nguyen Van Viet, head of the MARD’s Planning Department, rice output is expected to reach 28 million tonnes this year that can meet both domestic consumption and export demand of about 6.5-7 million tonnes.
Meanwhile, vegetable production is projected at 18.2 million tonnes, up 5 percent year-on-year; fruit at around 13.3 million tonnes, up 6 percent; and aquatic products at 8.5 million tonnes, up 4.4 percent. /.
Source: en.vietnamplus.vn
Prev
Next